As one of the oldest cryptocurrency exchanges in existence, Poloniex is sometimes regarded as a market leader with some of the lowest fees for trades and withdrawals. It remains highly popular among users since they can perform trades without divulging too much personal information or going through complicated verification steps; it’s possible to initiate small transactions with just a valid email address. For this reason Poloniex is one of the leading crypto exchanges in the US.

If you’re in Australia, you can take a look at our best cryptocurrency exchanges here.

As part of a highly competitive market, Poloniex continues to have a reasonably wide range of cryptocurrencies available and is noted for its relatively low commissions. This Poloniex review explores the history of one of the earliest adopters of cryptocurrencies and evaluates its endurance.

First launched in 2014 by Tristan D’Agosta, Poloniex was an early pioneer in the world of cryptocurrency. However, Poloniex was off to a rocky start when it suffered a high-profile security breach in March 2014. The exchange lost 97 bitcoins, a value of approximately USD 50,000 at the time.

In a nod toward transparency, the exchange offered full reimbursement of the stolen bitcoins, a gesture that was widely praised for its openness. In 2016, the company once more gained attention as the first exchange to list Ethereum (ETH) for sale or trade.

While it was initially envisioned as the U.S.’s first fully regulated crypto exchange, there were significant hurdles to overcome, such as adhering to KYC (Know Your Customer) regulations. Since then, the company has undergone several leadership changes and is currently headquartered in Seychelles. Most significant, it no longer requires the KYC restrictions and does not adhere to AML (anti-money laundering) laws, so as of 2019, it is not considered a fully regulated exchange.

In 2016, Poloniex made headlines when it decided to stop offering Bitcoins for sale, instead preferring to highlight its position as a global payment provider. The exchange does still allow the trade of Bitcoins. While Poloniex initially started purely as a crypto-to-crypto exchange, it has since branched out into crypto margin trading and lending.

The Poloniex exchange supports the most popular cryptocurrencies, including the following:

It’s important to note that while the platform no longer sells Bitcoins, it still supports this asset’s trading. The platform currently offers over 60 cryptocurrency pairs, and in terms of daily turnover, it is 55th among all exchanges.

Once users sign up for an account on the Poloniex exchange, they can fund their account via debit or credit card, cryptocurrencies, or bank transfer. The exchange is universally praised for its simple dashboard with an easy to navigate layout, a plus for those new to the cryptocurrency world. 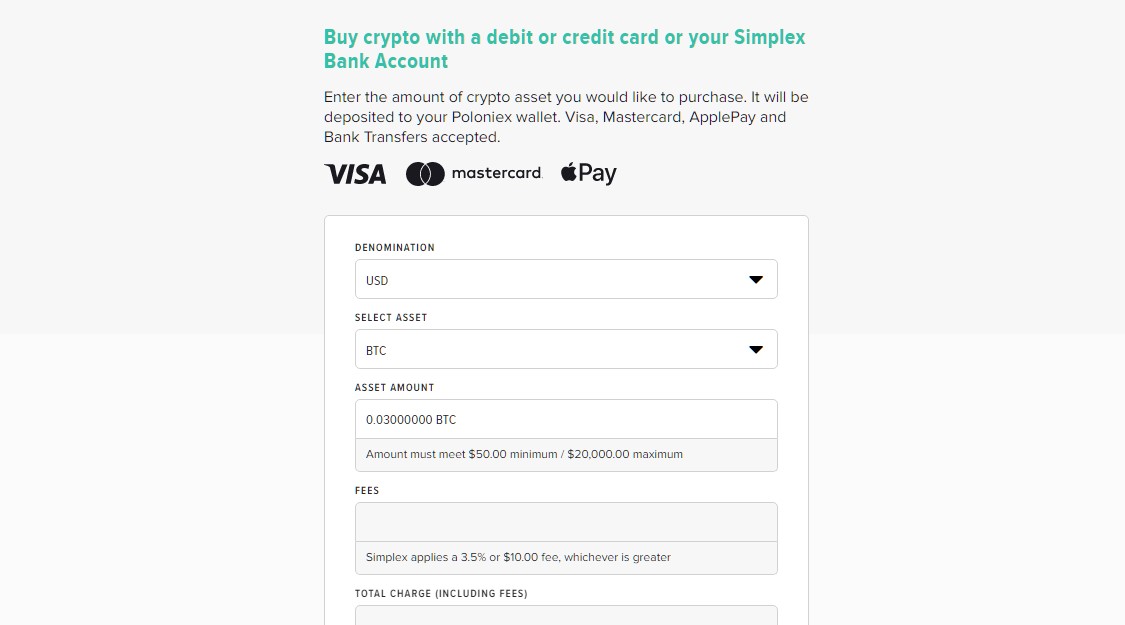 The fee structure for Poloniex is relatively straightforward and depends on whether you’re buying and selling and on your 30-day trading volume. Also taken into account is whether or not you’re a verified customer. If you are, expect to pay as little as 0.07% per trade depending on the currency. Unverified users can pay between 0.1% to 0.2%, depending on the coins being used.

While you can make the argument that it’s pricey to preserve your privacy, Poloniex is the least costly option for those users reluctant to release personal information.

For the more experienced users, there is the option to join the Poloniex Market Maker Program. To qualify, traders must have a minimum 30-day trading volume of USD 10,000,000 and have at least 12 trading pairs.

Completing trades and purchases is a relatively quick process, with the majority done in real-time. Withdrawals are also fast, with most transactions being finalized within 24 hours. If a transaction happens to be frozen, usually it’s an issue of suspected fraudulent activity. The customer support is generally quick to respond and reach a resolution. 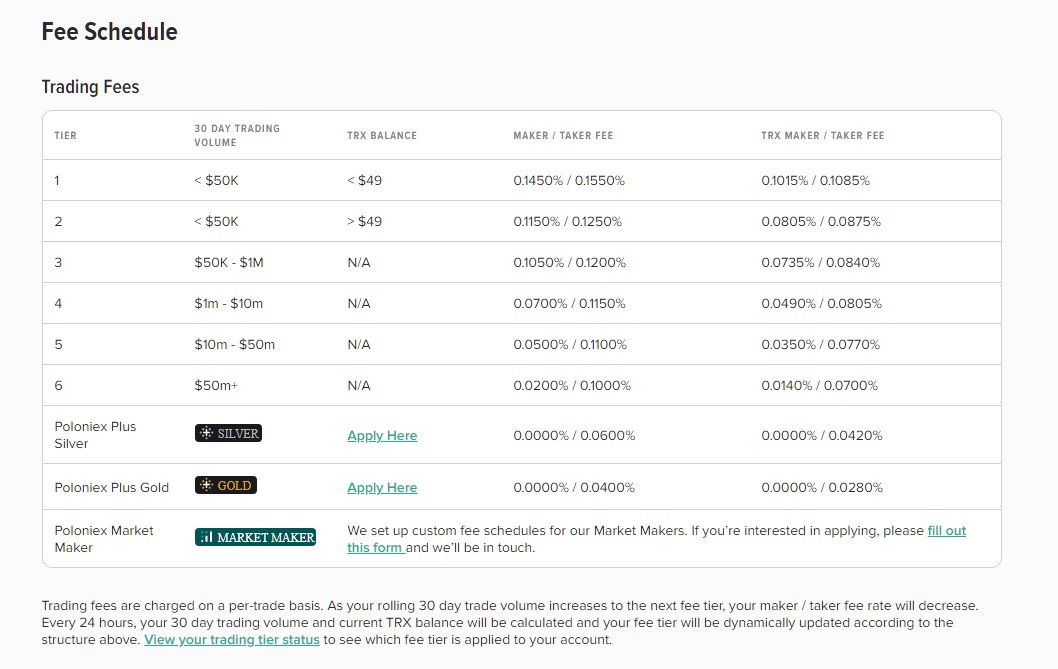 The exchange is widely praised for its easy interface, and new users will find it relatively easy to set up and fund an account with just a few clicks. Experienced traders will enjoy the range of options, such as detailed reports, and the option to create several profiles based on different trading strategies.

This Poloniex review finds that an outstanding feature of the exchange is the margin lending and borrowing feature, where users can create a passive income stream based on their cyber assets. Known as Poloniex lending, members can borrow money from each other at a fixed interest rate set by the lender. The lender, in turn, pays Poloniex a part of the interest earned.

Across the board, users seem highly satisfied with the Poloniex exchange. Whether a beginner or a more experienced user, most report high satisfaction with the low fees and the up-front fee schedule.

There are no fees for making deposits on the Poloniex exchange, regardless of the currency or amount. Unverified users are limited to withdrawals of USD 2,000 per day. For verified users, there are also no upper or lower limits for deposits or withdrawals. When making trades or withdrawals, users can expect a small per-transaction fee, which depends on the cryptocurrency in use. For example, a Bitcoin withdrawal currently costs 0.0005 BTC, which ranks among the lowest rates available across cryptocurrency exchanges.

The exchange boasts a daily trading volume of more than $100 million, the first cryptocurrency exchange to do so. A significant source of income for Poloniex is trading fees, paid by both buyers and sellers for trades made through the platform. There are currently two tiers of accounts offered to individuals. 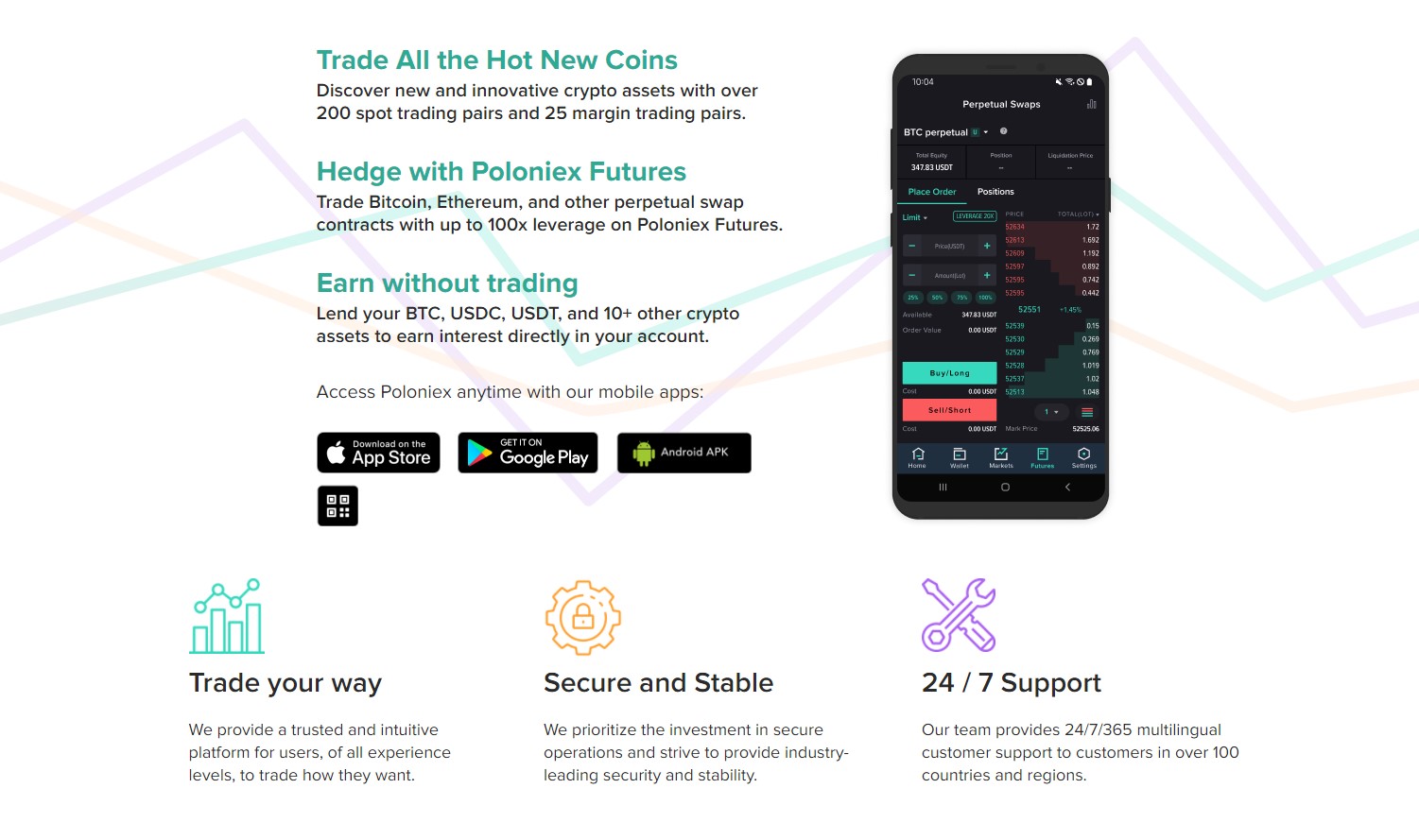 New users can quickly navigate the dashboard, and there is plenty of online help available from the chat boards and forums. A robot-friendly API (Application Program Interact) is available for the more experienced users, allowing users to automate specific commands for buying and selling. Users program their parameters, and once a particular price is met or other conditions are reached, the API responds with the specified action.

Poloniex offers several automated programs, or users can customize their own based on personal approach. Although this is targeted toward the more proficient users, those new to the exchange will still find it fairly easy to implement since a built-in tutorial is available.

A significant criticism of the Poloniex exchange has been the glaring lack of customer support in the past. Early users of the exchange complained of waiting months for a response when submitting a question or reporting an issue. This issue led to thousands of Poloniex users abandoning the exchange in its infancy.

However, the current interface is highly responsive to users, with a support team that operates round the clock. Customers who wish to report an issue or have questions have a range of available options such as email and live chat. The website is frequently updated, and users can opt-in to a newsletter or follow the exchange on several social media accounts.

There is also a healthy online community forum where users can swap information and compare trading strategies.

Since being hacked during the first few years of operations, Poloniex takes security very seriously. It was an early adapter of multi-factor authentication and continually reviews security protocols to prevent user information loss or unauthorized access. Also, Poloniex uses a combination of the following measures:

Poloniex places a high priority on security and stores the majority of wallets offline in cold storage. To minimize risk, it maintains only enough funds online to facilitate trading. This guideline diminishes risk in the unlikely case of hacking and protects users’ cyber assets.

It has security audits in place that work round the clock to monitor all transactions and red-flag any suspicious activity. The Poloniex exchange has won high praise for its stringent security measures, mainly in response to increased international pressure on cryptocurrency exchanges to cut down on money laundering and terrorism financing.

Another huge plus is the lack of stored user data. Since the Poloniex exchange does not follow KYC (Know Your Customer) or AML (Anti-Money Laundering) restrictions, it does not need to collect any personal information to verify identities.

Here are a few of the most frequently asked questions about the Poloniex cryptocurrency exchange.

Does Poloniex have a mobile app?

As an early embracer of technology, Poloniex was one of the first exchanges to develop an app. Available for Android or iOS mobile devices, the app does not yet offer users access to the full functionality of the exchange. Users can’t yet use the app for margin trading or buying cryptocurrency. Still, they can check balances and create trade alerts.

Does Poloniex provide a cryptocurrency wallet?

Yes. Like most exchanges, Poloniex offers the option of a web wallet. However, users are strongly urged to store their assets away from the exchange in either a paper, mobile, or hardware wallet for the highest level of security.

Is it safe to use Poloniex?

Yes. Poloniex has continually implemented security features in response to its earlier hacking and continually reviews exchange activity for any irregularities. Still, users will need to do their part to preserve their assets, including safeguarding passwords, storing wallets offline, and using only a secured network when making transactions.

Although Poloniex experienced a major stumbling block early on with a highly publicized hack, it has made great strides in recovering its standing. It actively seeks to widen its customer base with low trading fees and a friendly interface. While it remains user-friendly and very accessible to beginners, it continues to be a favorite of experienced traders for its transparency and lack of KYC measures.